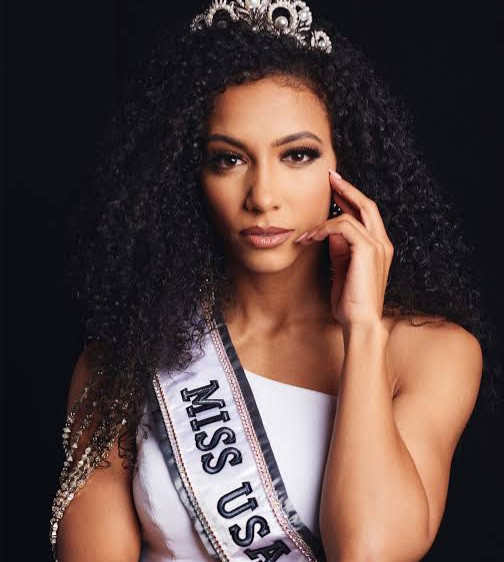 Cheslie Kryst’s Heartbreaking Goodbye Text To Her Mother Minutes Before Jumping To Her Death Has Been Revealed.

Cheslie Kryst, the former Miss USA, sent a devastating parting text to her mother minutes before jumping to her death from her New York City apartment.

Kryst, 30, texted her mother April Simpkins just before jumping from a high-rise in New York City earlier this year, saying: ‘First, I’m sorry, by the time you get this, I won’t be alive anymore. And it makes me even more sad to write this because I know this will hurt you the most.’

Simpkins revealed on Red Table Talk that she ‘near blacked out’ after reading the message. ‘By the time I had read the text, an hour had passed,’ she told host Jada Pinkett-Smith, her daughter Willow Smith, Pinkett-Smith’s mother Adrienne Banfield-Norris. Kryst had sent her mother the text while she knew she’d be in an exercise class.

‘I [remember] calling my husband and screaming “what, what” and we got home and just trying to figure out what to do. I had not read the rest of her message, I just couldn’t.’

She added that she instantly took the text seriously because this was her daughter’s second suicide attempt. She had previously attempted suicide in her early 20s, her mother said.

The long message went on to say: ‘I love you mom, and you are my best friend, and the person I’ve lived for for years. I wish I could say with you, but I cannot bear the crushing weight of persistent sadness, hopelessness, and loneliness any longer.

‘I’ve never told you these feelings, because I never wanted you to worry, and because I hoped they would eventually change, but I know they never will. They follow me through every accomplishment, success, family gather, friendly dinner – I cry almost every day now, like I’m in mourning. I wished for death for years. And I know you would want to know and want to help, but I haven’t wanted to share this weight with anyone. ‘Regardless of that, thank you sincerely being there for me in some of my loneliness moments without me even telling you I needed you. You have kept me alive and ready to face another day, because you answer every phone call and you are there for me at the drop of a hat. You listen to me and care when I tell you what goes on in my life and you’ve always made me feel as if you loved me.

‘I love you more than any person I’ve ever known. You’ve done nothing wrong, you’ve done everything right.

‘I no longer feel like I have any purpose in life. I don’t know if I ever really did.’

Her mother revealed she knew her daughter was struggling with depression, but ‘didn’t know the severity of it.’ She also said she started to realize her daughter’s ‘smiles were a little forced’ and she encouraged Kryst to call when she needed help.

The former Miss USA, who was a huge advocate for mental health and therapy, had gotten counseling and started focusing on getting good sleep, Simpkins said on Red Table Talk, but she often ‘deflected’ her own emotions.

‘Depression is not always marked by someone laying in bed or unable to do things,’ she said on the show. ‘There are people who are high-functioning and can get through the day because they wear ‘the face,’ and we’re all taught to wear that face. Cheslie wore that face.’

The NYPD confirmed her daughter’s death to her before she and her husband’s flight from South Carolina to NYC was taxiing on the runway.

‘I don’t remember the plane ride. I remember my husband sobbing,’ she said. ‘We got to New York, we got into the hotel room and we were both just on the floor.

She said she had seen her daughter, who she referred to as her ‘best friend’ since the month prior, when they took a trip to Universal Studios – a trip the family would take every other year.

Also in the text, Kryst gave her mother permission to share the suicide note so the world would know how much a good mother she was. She also revealed she didn’t think she could repair her friendships and ‘escape’ loneliness.

‘I’ve pushed away most of my friends, and I can’t fix any of it no matter how hard I’ve tried.’ she wrote. ‘So, I will leave and rejoin God in heaven and hope to find peace there. I don’t want to leave, but I genuinely feel like I have to if I want to escape my loneliness that feels like it has no end. I fought against depression for a long time, but it’s won this time around.

‘There aren’t enough words in the world to describe my love and appreciation for you. You are the perfect mom and I will love you forever, even in death.

She also said her daughter knew she would ‘need those words’ to move forward and said it was ‘healing’ to talk about her daughter.

The former Miss USA was crowned by previous winner Sarah Rose Summers in 2019.

Pure Wickedness! A Dad Did This To His 3-year-old Son For Bedwetting

Just In: Riot In Iyana Ipaja Over Okada And Keke Ban